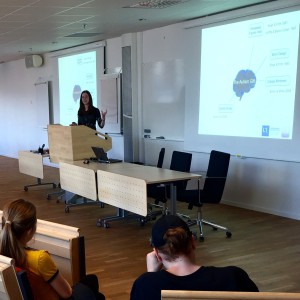 Thanks to all of you who defied the beautiful weather and came to our seminar about Global neuropsychiatry last Wednesday! On the 4th of May, we had the fortune to listen to Dr Anna Remington. She is a Lecturer at the Centre for Research in Autism and Education, UCL Institute of Education. Her work focuses on superior abilities in Autism Spectrum Disorder, specifically with respect to attention and perception within the condition. Dr Remington began working on autism in 2004 after receiving a BA in Natural Sciences from the University of Cambridge. She obtained a Masters in Human Communication Science and a Ph.D. in Developmental Science from University College London and subsequently worked as a Postdoctoral Fellow at the Institute of Cognitive Neuroscience, London before moving to the University of Oxford as a Junior Research Fellow in 2012. Her findings have been published in the leading journals within the field, and she is regularly invited to present her research both nationally and internationally. Anna Remington talked about the superior abilities among the people with ASD. She presented the idea of Autism as a ‘difference’ rather than a ‘disability’, and her research that demonstrates that individuals with ASC are able to process more information at any given time than neurotypical controls. This ‘Increased Perceptual Capacity’ may explain many of the behaviors – both positive and negative – that are seen within the condition. We were also fortuned to be able to skype with psychologist  Sandra Carolina Fagua-Garcías, working with autistic children in Colombia, and with Nineth Montero Martinez telling us about her life as the mother of a child with disabilities in Bolivia.